“Runic” is a name used since the 19th century for a category of roman typefaces with sharp serifs or flared (AKA “Glyphic”) terminals. This particular typeface is Monotype’s very narrow style, Series 420 Condensed, designed by Gerry Powell and staff, and released in 1935 [MyFonts]. Perhaps based on Stephenson Blake’s Reed’s Runic Lining Elongated shown as far back as 1908.

Digitized by Adobe in 1991 (used for sample) and released simply as Runic.

Runic (Monotype) in use

OR XATA Beer by The Bruery2015 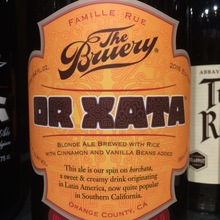